Posted 10:00 AM ET – The war in Ukraine and the upcoming FOMC meeting will keep uncertainty elevated. Market conditions remain volatile.

Jerome Powell said he favors a 25 basis point rate hike in two weeks and subsequent rate hikes in future meetings. This is better than feared. The jobs report today was robust and 678K new jobs were created ad that was much better than expected. The hourly wage component (.4%) was also better than feared and that will take a little pressure off of inflation fears.

The PMIs in Europe were on the light side and China’s PMI was as well. I’ve been pointing this out for many months and I smell a rat in China. If their economy is growing at 5%, why is their market making a new 52-week low? Money should be flowing in, not out. I suspect that credit issues could be brewing.

ISM Services was weak yesterday (56.5 vs 62 expected) and that is a concern. The ISM reports are surveys and they are current (not backwards looking). The services sector is 80% of our economy so this is an important data point. Inflation is hitting levels we have not seen in 40 years. Bill Gross feels that we could be entering a period of stagflation where upward pressures on prices negatively impact consumption. CPI and PPI will be released next week and we will see if that influences Fed officials. Powell said that he has not witnessed this level of persistent inflation.

Russia continues to advance in the Ukraine and they bombed the largest nuclear power plant in Europe. The fire was extinguished and there was not an increase in radiation levels. The ruble has lost 50% of its value and the assets of its central bank have been frozen. International companies have stopped shipping products to Russia. China is not sanctioning Russia. They have military ambitions of their own and they are quietly gauging the world’s response. Russia has reserves at the PBOC and they will use them to purchase goods. China will also buy as much cheap oil as it can get its hands on.

Swing traders are long SPY at $430 from the open last Friday. I like the market at this level from a 2-3 month perspective, but short-term swings trader still need to be cautious. I feel that any dip between now and the FOMC meeting will be a good entry point for bullish put spreads. The SPY $425 level has been tested multiple times since last July and I believe it is going to hold.

Day traders need to be patient. Wait for market direction. Yesterday I did notice better price action on the short side. These stocks had excellent momentum during the day and there were more candidates to choose from. Hot and cold sectors/groups change day-to-day so take your time and wait for your windows of opportunity. The rotation is brisk and if you can latch on to a hot group of sector you will increase your odds of success. Basic materials stocks and consumer staples (food stores and producers) have been strong. Chinese stocks have been weak. 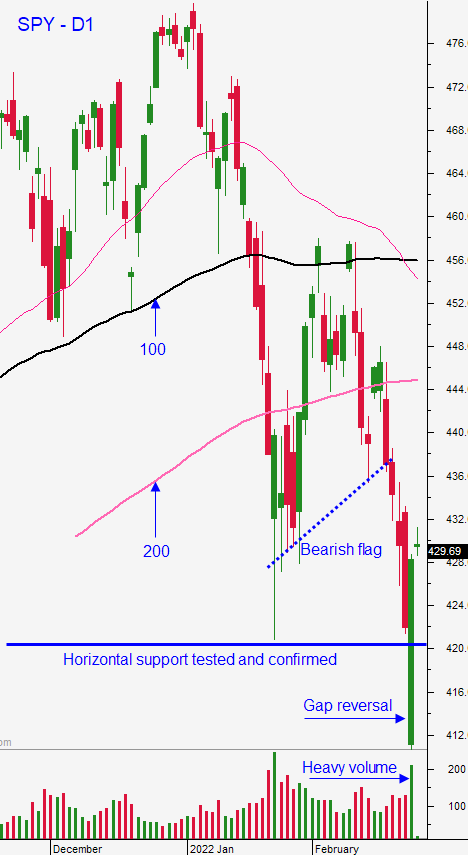