FOMC Statement Was Hawkish – Market Does Not Care… Yet

Posted 9:30 AM ET – PRE-OPEN MARKET COMMENTS THURSDAY – Yesterday the Fed announced the reduction in US Treasury purchases. Tapering is the first step towards tightening and the timeline has been moved up to 2022 for the first round of tightening. Central banks around the world are playing “chicken” with inflation. None of them want to tighten, but most of them will be forced to as yields rise.
The spike in prices (wages, oil, ore and food) is pushing real yields (interest rates minus the inflation rate) further into negative territory and that makes stocks attractive on a relative basis. Yesterday the Fed said that inflation is more prevalent than they had initially forecasted and that it is likely to last longer. Tightening will provide a headwind for the market in 2022.
ADP announced that 541K new jobs were created in the private sector during the month of October and that is better than the 400K that was expected. ISM manufacturing was strong this week and ISM services came in at 66.7 (one of the highest readings I can remember.
China’s leaders (Xi and Li) have both suggested that economic growth is slowing. Official PMIs have been in contraction territory the last two months and the spread of Coronavirus has not been this high since the outbreak in Wuhan. Real estate developers are on the ropes and it is difficult for them to secure financing and a handful of them are on the brink of default. This backdrop will NOT improve as China considers property taxes (they do not currently have them). Electricity is in short supply and it is being rationed. China accounts for 30% of the world’s manufacturing and this is significant in terms of supply disruptions. Chinese leaders are urging citizens and provinces to stock up on food (shortages expected). This is a very bearish backdrop for the second biggest economy in the world and the global growth engine for the last two decades.
Stock valuations have not been this high since the tech bubble of 2000. Earnings have been solid, but year-over-year comps will be harder to beat.
Swing traders can sell out of the money bullish put spreads on strong stocks on dips to the 50-day MA. Any drop to that level will be brief so be ready. Seasonal strength will keep buyers engaged and I do not see a threat of a credit crisis into year end. I would not be overly aggressive.

Day traders should not chase the opening gap up. After a big run yesterday I feel the bid will be tested early today and we will see a compression or a pullback. The Fed did not postpone tapering until 2022 and the timeline for the first rate hike was moved up. I view these as bearish outcomes for the market and I doubt that Asset Managers are more anxious to buy stocks than they were before the news. Be patient today and pick your spots. During the first hour spend your time looking for technical breakouts on heavy volume and find stocks with relative strength. Once the bid is confirmed we are likely to grind higher and you will have a window to get long. Unless I see consecutive 3 long red candles stacked on the SPY during the day I am not going to trade the short side. I need proof of selling pressure.
Support is at SPY $460 and resistance is at $470.
.
. 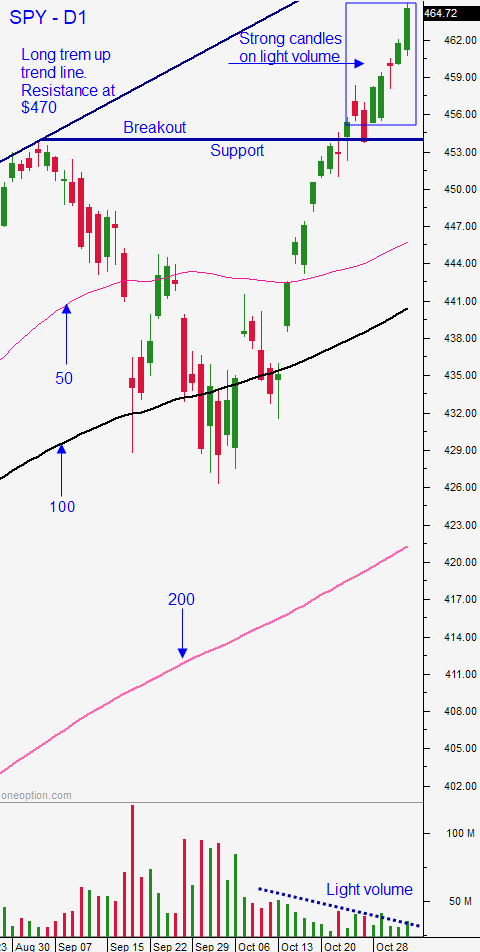