Posted 9:40 AM ET – PRE-OPEN MARKET COMMENTS TUESDAY – The S&P 500 is within striking distance of the all-time high after testing the 50-day moving average last week. Since the beginning of the year this rally can be characterized as a three steps forward, two steps backwards process. After each move higher, the bid is tested and we are going through that test this morning. US 10-Year Treasuries (TLT) are declining and upward pressure on interest rates is weighing on the market. The S&P 500 is down 10 points before the open.

Major economic releases are on deck this week. ADP will be released Wednesday and Thursday we will get official PMI’s and ISM manufacturing. It’s unusual for the Unemployment Report to be released when the market is closed, but that will happen Friday. Traders will be leaning on ADP and the initial claims number Thursday. Last week initial jobless claims declined to their lowest level in months and we can expect a job recovery as states reopen.

I believe that bonds are selling off because there is a potential supply of another $3 trillion in debt that will be issued to finance President Biden’s infrastructure bill. Since May of last year $9 trillion of stimulus has been approved. Our national debt is ballooning and it’s incredible to think that in the first 225 years of our nation we only had $2 trillion in debt. In the last 10 months we have spent four times that amount. This will have a long-term impact on our nation’s credit, but in the short run it is market friendly since some of that money will find its way into investments.

The Fed expects inflation and they are not going to raise interest rates until 2023 according to their projections. That means that we are in a “sweet spot” where strong economic numbers will not prompt tightening. The Fed wants to see a substantial improvement in the labor market before it considers any rate hike.

This is a holiday shortened week and when we come back from Easter, earnings season will be at our doorstep. With another quarter of profits under our belt, valuations will start to normalize. States are reopening and Q2 guidance will be robust.

Swing traders should stay long SPY and we will use a close below the 100-day MA as our stop. I believe the market will challenge the all-time high as earnings season approaches and you can sell out of the money bullish put spreads on strong stocks. I would avoid selling them on tech stocks until the QQQ can get above the downward sloping trend line.

Day traders should wait for support this morning. The bounce off of the 50-day moving average was strong for the S&P 500 and I believe that buyers are engaged. Overseas markets traded a little higher and I believe that the market will shoulder the overnight rise in interest rates. We do not want TLT to take out $133. A higher low could mark a short-term low for bonds and that would be good for the market. Down opens in a bullish market are my favorite set up because it’s easier to spot relative strength. Identify the stocks and wait for market support. 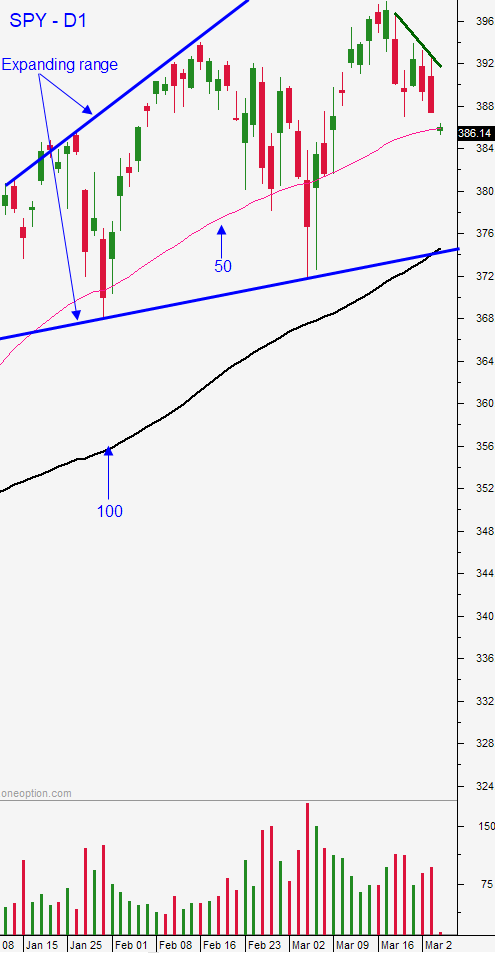