The Market Is Waiting For A Stimulus Bill

Posted 9:30 AM ET – The S&P 500 has been compressing near the all-time high for the last 10 days. Inflation worries are putting upward pressure on interest rates but the Fed has reiterated that it has no intentions of raising rates anytime soon. Their focus is on the labor market and initial jobless claims came in higher-than-expected this morning. Democrats have promised a stimulus bill before the end of the month and that timetable is approaching quickly.

The impeachment was never going to get enough votes and the GameStop hearings today will be meaningless as well. Politicians should be focusing on a $1.9 trillion stimulus bill instead of grandstanding as Robinhood and Reddit get raked over the coals.

The economic news has been solid. This morning the Philly Fed came in at 23.1 and that was better than expected (20). Unfortunately, initial jobless claims came in at 861,000 and that was worse than expected (765,000). Unemployment is the Fed’s primary concern and they have stated that inflation can rise above their target rate. The PPI came in “hot” (1.3%) yesterday and import/export prices were higher-than-expected this morning. These numbers have sparked a rise in interest rates. Retail sales increased by 5% and consumers are spending.

Earnings season has been strong given the macro backdrop. Companies have increased guidance at a faster pace than expected.

New Coronavirus cases have dropped by 80% from the peak in November.

In my opinion interest rates have to rise incredibly before they impede economic growth. I don’t believe this is a threat to the market. There is resistance at the all-time high and we are likely to stay in the upward sloping channel. When we get near the upper end, expect profit taking. When we get near the lower end expect buying.

Swing traders should place a stop at SPY $385 on a closing basis. I’m not worried about intraday movement, just where it closes. That was the previous resistance level and now it represents support. I will be exiting some of the call positions in the next week because they expire in March and they will be exposed to time decay. Furthermore, the market has lost its upward momentum. Bullish put spreads are the right strategy for this market environment and I suggest waiting for a pullback before you enter new positions.

Day traders should wait for market support this morning. The S&P 500 has been drifting lower and the low from Wednesday will be tested. Once support is established, look for relative strength and heavy volume. Overseas markets were weak and I suspect that the drop this morning will take time to find support. The best case scenario for bulls is a series of three or more consecutive long green candles closing on their high to start the day. That would indicate a strong bid and that the market is ready to rebound. A bearish pattern would breach horizontal support at $387.50 with a new low of the day after two hours of trading. I still favor day trading from the long side. 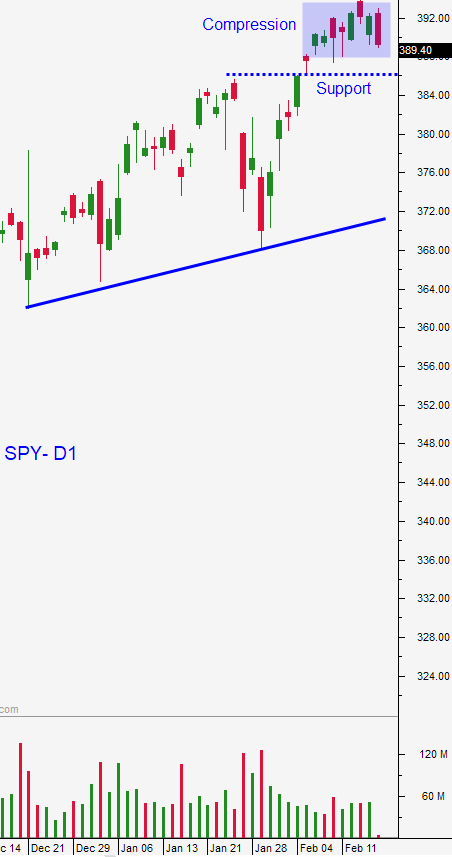