Bullish speculation was very high heading into Friday’s Unemployment Report. If the number was weak, bad weather would be blamed. If the number was strong, economic activity would appear to be on the mend. Traders viewed this as a “can’t lose” proposition.

In February, 175,000 jobs created and the number was much better than expected. The market surged to a new high, but it could not hold the gains. I mentioned Friday and yesterday that bullish speculators needed to get flushed out.

The news was a little heavy over the weekend. China’s trade balance was soft and Japan lowered its GDP projections. Stocks declined on the news and it looked like the market was in trouble. Late in the day, buyers stepped in and the S&P clawed its way back.

The news this morning was light. We should probe for support early. The bid will strengthen and we should finish higher today.

I am scaling into call positions this week. I expect the SPY to close above $189 (Friday’s high). The dips will be brief and shallow.

Asset Managers did not get the pullback they were looking for. Those who are under allocated will be aggressively buying this breakout. They do not want to miss the next run.

The economic news this week is fairly light. China will post retail sales and IP on Thursday. The news should weigh on the market, but domestic results will soften the blow. US retail sales will also be released and I believe recent shopping trends will be encouraging.

Many analysts believe that the polar vortex has suppressed consumption. This pent-up demand will be released as temperatures rise. Spring is right around the corner and that will boost consumer sentiment.

From a macro standpoint, the good outweighs the bad. Weakness in Asia will be offset by strength in Europe. Domestic conditions will improve in coming weeks.

Crimea will hold a vote on Sunday. It will be rigged and it will be annexed to Russia. Europe and the US will slap Putin’s hand and global markets will shrug the news off. As a Latvian, I am saddened by the lack of support shown by the EU and the US.

Obamacare will be delayed and the debt ceiling has been extended.

Global credit concerns are low and corporate earnings grew at a robust pace.

Interest rates will creep higher and the market will embrace the move as long as it is accompanied by economic growth.

There are plenty of headwinds to keep sellers engaged. When the market gets ahead of itself, we will see profit taking.

Scale into call positions this week. You have time, so ease in. As long as the SPY is above $185, stay bullish.

Focus on stocks that are breaking through horizontal resistance. Use that breakout as your stop.
.
. 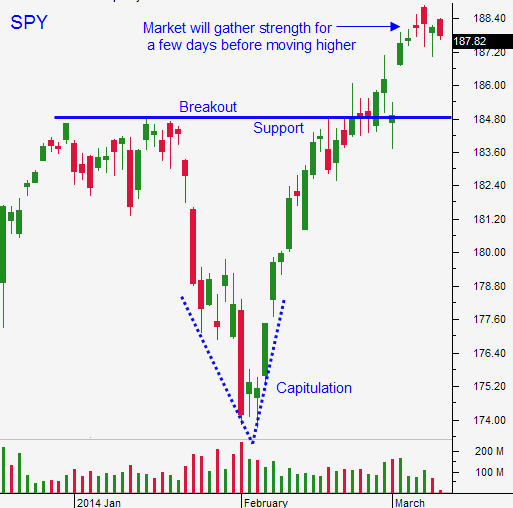