I’m not a big fan of strangles so keep that in mind as you read my option trading blog. As I mentioned in my previous post, the elements of an explosive move need to be present. Earnings alone won’t do it, especially if they are “in line”. There has to be a surprise component. The fact that we are close to expiration helps. We are not worried about time premium decay, this trade will work overnight or it won’t. While we are paying high implied volatilities (IVs) your dollar cost is not as great because there are only a few days left before expiration.

Here is the scenario. Last quarter, there were a few brokerage firms that missed their number. One was Piper Jaffray Co. (JPC). After the news the stock fell from $52 to $48. In the release you will find that institutional and retail brokerage declines were offset by gains in investment banking activities. In the end, the company still missed street estimates by $0.02/share. Since the August low of $48, the stock has climbed to $62.80. If it misses now, it has farther to fall. 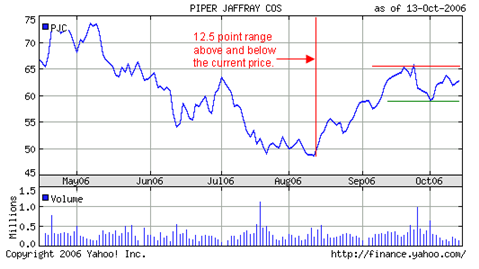 As you can see, the stock has a wide range and no trend. From the current $62.50 level, the stock has been $12.50 higher and lower in the last six months so it has plenty of room to move. You can also see minor resistance at $65 and minor support at $60. If either of those two levels are breached, the stock has a chance to gain momentum.

Last week, brokerage firms Legg Mason (LM) and TD Ameritrade (AMTD) warned. Look at how similar their charts are to PJC. You have the peak in March, the deep sell off last summer, the rebound with the market rally and then a drop last week. PJC trades at a forward P/E of 20.7 according to Yahoo Finance so it is not a cheap stock. It has not rallied with peers like GS, LEH or BCS – all of which trade at much lower P/Es. If I had to guess, I would be leaning toward the bearish side. Since the stock has traded to $75 and I don’t know which way it will go – a strangle might make sense.

If the stock moves marginally in either direction, you might be able to salvage something out of the trade, but once the news is out, the premiums will vaporize since there are only 3 days until expiration. The options chain above and the graph below were supplied by optionsXpress. Below you can see that the options normally trade at a high implied volatility over 40. It is the blue line and the IVs have gone up slightly from the 35 level a year ago. 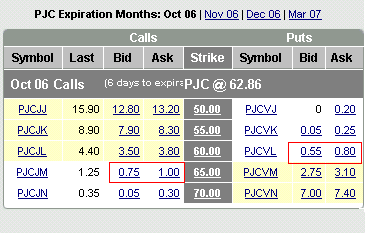 If the stock moves more than $5.50, you stand a chance to double you money. There is not much you can do with the side of the trade that will expire worthless. It will immediately get drained. The key is to manage the profitable side of the trade and with only 3 days left until expiration, scaling out and taking profits along the way makes sense. 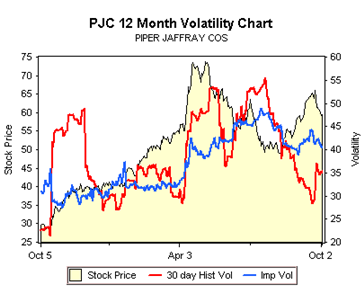 Last week LM dropped almost 20% and AMTD dropped about 14%. If you take the lower of the two, PJC would drop $8.75. Notice how those moves happened overnight. That is how this will take shape if it is going to happen. An $8.75 drop would result in a stock price of $55 and the 60 puts would probably yield a 200% profit. If you assume that there is a 50:50 chance of either outcome. you have a 50% chance of losing $1.65 and 50% chance of making $3.30. That yields a positive expected value and the trade makes statistical sense.

I’m not going to assign that probability. I don’t know what this stock will do. This example simply gives you an idea of how you might approach a straddle or a strangle. If you trade this earnings release, be prudent. I won’t trade it at all since I like situations where I have a higher probability of predicting the outcome.