How I Trade Options – Form An Opinion – Duration!

This option trading blog will discuss how the duration of the expected move impacts the strategy selection. I feel that this is one of the biggest mistakes novice traders make. They are so worried about time premium decay and about being wrong that they buy the longest term LEAP option listed.

When I conduct my analysis, I form an opinion on how long it will take the move to “play out”. The nature of the move will help me nail down the time horizon. There are three general categories that a trade will fall into and sometimes they intersect.

Trend – The first category is trend. If I’m looking at a stock that is on a steady course from point A-B, I can extrapolate the time horizon. If the pattern is nice and tight and my projection is 2-3 months long, I will consider an in-the-money (ITM) option with three months of life. I want a surrogate stock position where my deltas are high and I’m not paying much if any time premium. If the stock makes its move and stalls or if the market conditions change, I can decide to take profits and move on. If the stock is on a choppy but consistent trend higher, I will often sell some near term out-of-the-money options against the ITM position and create a diagonal spread. In these cases the implied volatilities (IVs) are usually higher. This strategy reduces my risk and I can take advantage of time decay while the move unfolds.

In the example below, the stock has a history of making nice predictable moves higher. It does so in a grinding manner and you just have to be patient. When I formulate my game plan, I can see that it might take 2-3 months for the move to materialize. I can take comfort in buying an ITM call with a 4-5 months of life because the stock has not had a pattern of making violent moves. As it grinds higher I’ll be able to take profits along the way if I choose since the deltas will be relatively high (above .7). 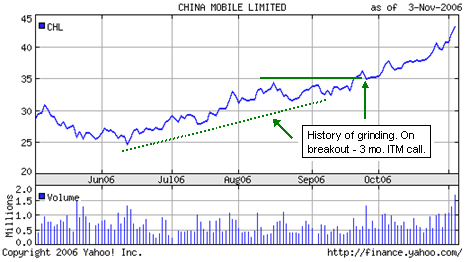 Breach – When a significant price level has been violated I’m looking for the momentum to pick up and for the move to be sustained. This can be a breakout above a horizontal resistance level, a breakdown below a trend line, a fall below a long term moving average… Many traders have noted the event and the activity picks up. In these cases, the initial surge and follow through are not usually more than a month long. After that, the activity can get choppy as the stock determines a new range. The longer term the support or resistance level, the more significant the breach and the more explosive the move. In these instances I might opt for an out-of-the-money option with 2-3 months until expiration because I’m expecting a big, sustained move. If the breach is less significant I will stay closer to the money and maybe even ITM. I will try to capture part of that early “pop” while the price action is still predictable and then get out.

In this example, the stock has a pattern of making big sharp moves once a key price level has been broken. The options are bound to carry “rich” premiums but they are justified. In this case, I would buy out-of-the-money (OTM) options that are one strike out and have 3-6 weeks of life. I don’t plan on being in the trade for 4 months, so why buy those options. When you “buy time”, the premiums are much more expensive and the deltas drop down. In other words, you don’t get the same “bang for your buck”. 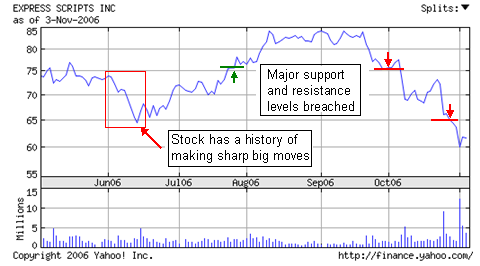 Event – An event driven trade could be an earnings announcement, an FOMC meeting, a housing starts number, an oil inventory number… you get the idea. Earnings announcements, FDA approvals/rejections, lawsuit settlements are normally released after the market is closed. In some instances the exact release date is not known, but traders are able to define a date range. This is not a big part of my trading because the outcome is unpredictable and the implied volatilities in the options are “jacked”. This makes it hard to profit even when the move is big because there is so much uncertainty factored in. When I’m looking to trade a stock before earnings are released, I will stay in the front month options that expire after the announcement. I plan on being out of the trade before the actual release and I know the options will retain their implied volatility before the news. If I’m trading options after an earnings release, I will normally go out 6-8 weeks because I know there is a chance I will hold the position now that the uncertainty has passed.

In this example I was looking for PJC to make a big move on the earnings announcement. It was releasing the news 3 days before expiration. There was no need to go further out since the stock would either make a huge move – or not. In any case, I planned to be out of the position in a day or two. The strangle was purchased for $1.60 and it traded over $5 in the next two days. If you look at chart below, you will see that a longer term option would not have moved nearly enough because the premiums were so high. The November strangle was trading over $5.00 before the release. It barely made money and it would have tempted me to stay in the position longer than I should have. As you can see the stock has fallen back to $65.00. By the way, is that a significant support breach? 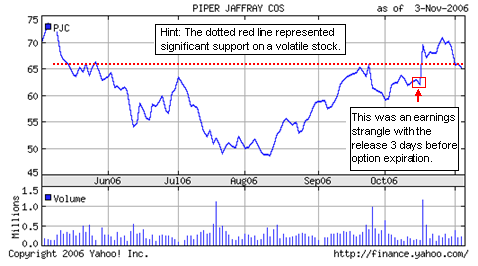 The problem with being in a position were you don’t give yourself enough time is that you have to roll the position into a future month as expiration approaches. When you do that you incur extra commissions and you have to fight at least two extra bid/asks. You are also exposed to accelerated time decay when you own front month options.

If you give yourself too much time, the options are less liquid and the bid/ask is wider. The options have more time premium so the deltas are lower and the options don’t move like you had hoped. The trade also ties up more capital than it should and it lulls you into hanging on to a bad trade because you “have time” to be right. Have you ever bought a LEAP where the stock made the expected move but you didn’t make any money? By the time you figure in commissions, slippage and low deltas, the options didn’t go anywhere. That’s my point.

If I have a trade that will last 1-2 days and it is not event driven, I won’t even consider options. The stock is a more effective vehicle because the slippage is lower and it has a delta of 1.0. I like the fact that I can get in and out with ease.

Duration is a very important element. Often, I’ll get out of a trade just because the expected time frame has lapsed without a move. With every tick of the clock, my initial analysis becomes more uncertain.

My next blog will explain how confidence affects my trading decision. There are only a couple of steps left in my approach to options and they might be posted to the new blog.

Rolling Naked Put Options For a Credit – A “Down and Out” Option Strategy!

How Can I Get An Entry Level Position Where I Can Learn How To Trade?

5 Ways to Handle a Draw Down

Why Use The SPY As A Market Gauge?