Many of you are asking for my perspective on this drop. Earnings are good, the economy is strong, employment is full, the P/E ratios are in-line… The stocks that looked good a week ago still look good and they are cheaper. What could possibly cause the market to go down? In a word – fear.

Margin debit as a percentage of account balances is as high as it was in 2000. When traders are over-extended, they can’t take the heat when the market starts to fall. That is a classic shakeout. Most people think… well I’m in it for the long haul and I’ll just ride it out. That mentality works for the first 10% move. By the next 10%, they are nervous and they are out. A big decline with a “V” bottom becomes a mere blip on the radar screen of a 10-year chart. However, seasoned traders look at those blips and remember the blood that was spilled.

Such was the case in 1998. I had grown one of the largest option order desks in the country and I had thousands of option traders using our services. The economy was strong, the earnings were good, interest rates were in line and the internet was creating a buzz. Out of nowhere, we had a big rally to new highs and a sharp reversal. Sound familiar? Everyone looked at the fundamentals and took comfort knowing that everything was still intact. It seemed that a hedge fund had lost some money.

Initially everyone thought… so what, it’s a hedge fund. The stock I liked yesterday is the same today, except it is 3% cheaper. The hedge fund was created by two of the founders of modern day option pricing models (Robert Merton and Myron Scholes). It was called Long-Term Capital Management. They had a very “conservative” arbitrage model. It was so conservative that brokerage firms felt very comfortable letting them leverage the positions. The fund collapsed in 1998 when Russia defaulted on their debt and the whole house of cards came crashing down. Here is a link that describes the event in greater detail. Long Term Capital Management The ensuing sell off in 1998 was huge and the SPY fell 25% in a month.
.
. 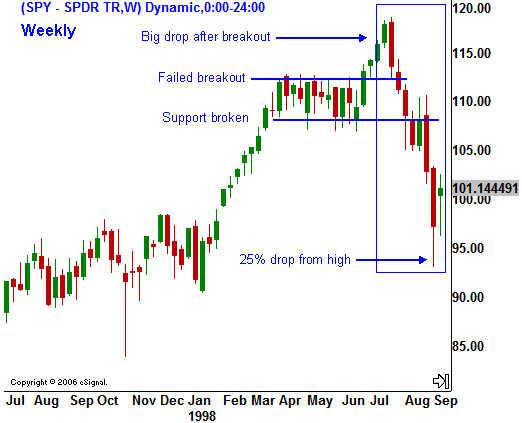 The market was up big going into the hedge fund collapse and the drop it created was nasty. Mind you, the SPY was still 50% below the 2000 high and it had a long way to go.

The Yen-Carry Trade is in trouble if: the Yen rises, Japanese interest rates continue to move up or traders using the strategy get nervous. There is still room in the spread, but as it narrows, the pressure will increase and traders will start to unwind it. Borrow cheap, leverage big. This trade has been leveraged 15:1 and there are more hedge funds than ever.

Retail margin debit as a percentage of the account balance is at 2000 levels and I sense a shakeout. Novice option traders like to pound their chest and brag about all of the money they’ve made during a bull market run. They only see one side of the market and I’m sure they will be buying into this dip. The last 3 years have been in a nice uptrend, just like they were in 1998. Seasoned option traders have been humbled and they always keep their emotions and positions in check. This is a time to be balanced and to keep a portfolio of longs and shorts. The implied volatilities are still inexpensive relative to their 10-year average. Being long puts and calls can be a winning combination even with the recent spike in premiums.

After the dust settled in 1998, there was a great buying opportunity and the SPY went from 95 to 140 in less than a year. The take away is that the market was a good buy in 1998 at 125. However, if you were an option trader, you blew through your capital and you never got a chance to participate.

Is the market a good value? Yes, I think the fundamentals are very sound. Is the Yen-Carry trade a LTCM situation? Perhaps, there are more hedge funds than ever and if they are leveraged, a small move in the wrong direction could cause a massive liquidation. Over confidence leads to over-exposure. One series of sharp drops creates fear, margin calls and losses. If you’re really, really sure that this is a buying opportunity, be careful. A warning shot has been fired.

Surrogate Market Positions – How and Why?

Understanding the Risks of Options Trading

How Can I Exit This Option Trade Without Getting Whipsawed?