Option Trading Strategy – A Follow-up To Armor Holdings and The New Plan In Iraq!

Before you can devise and option trading strategy, you have to form and quantify an opinion. Last month, I had to gather information before I could take a calculated guess at the new strategic plan for Iraq.

This week, President Bush announced that he will increase our presence in Iraq. Normally, people are difficult to predict. However, history has taught us that he is very decisive and once he starts something, he is steadfast in his conviction to finish it. The Democrats kicked and screamed before and after the momentous speech. Senator Barack Obama has become a “voice” for the Democrats and he made two things clear. His party did not support the plan and the safety of our troops was first and foremost. Smartly, the Democrats are in cut and run mode and they are positioning themselves for the next election.

Regardless of who originally supported the invasion, they are using this juncture to separate themselves from the war effort. For those Americans who are just “tuning in”, you would think that Republicans forced the whole war down our throats. Even in a best case scenario, it’s likely that we will end this freedom fight with “egg on our face”.

The additional funds needed for the surge will be used as leverage by the Democrats. I believe the of the funds will be approved at the expense of a tax compromise. The Democrats want to increase taxes to upper income Americans and Bush has been fighting that battle as well. This is their chance to get something they want and they’ll claim that the additional war budget can’t be funded without a new source of income. Enough about politics, lets take a look at the trade.
.
. 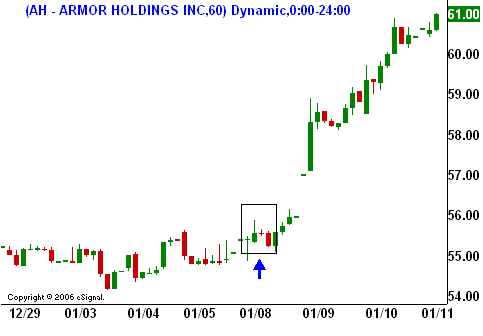 .
.
The stock held steady until it became clear that President Bush was going to send additional troops. This week it popped up 10% and it ran through the $60 level as I thought it might. The February 55 puts that we sold for $2.65 are now offered at $.55. I think the stock is a great value at $55, but given the caveats to our surge, it appears that we are giving the last ditch effort very little time to work. As conditions to our continued presence, the new regime has to perform and they need to grant us the freedom to do as we see fit. If those elements change, we are pulling out. Traders may see this as the end of an escalating defense budget and they could put pressure on defense stocks. At this stage the trade has netted $2.10 on a margin requirement of $11 and that nearly equates a 20% return in a month. I say – take it.

This trade exemplifies the thought that goes into my option trades. I am a directional trader and it is critical that I form a well-substantiated opinion. Once I do that, I can quantify the duration and the magnitude of the trade. I take my confidence into account and then I analyze the options. In this case, buying calls would have made more money, but the stock had been range bound for many months and it could have stayed at $55. We were able to take advantage of a spike in implied volatility. Prior to the speech, the implied volatility of the options had dropped 4% and the options were trading $1.10 lower with the stock around $55. In hindsight, I would not have changed the option strategy.

The Macro Market Conditions Have Changed – Adjust Your Tactics!

Short The Weak – A Current Example!

The Characteristics of a Great Options Trader

What is Day Trading?

How I Trade Options – Market First!