In Leg 2, we saw the market make a new relative low and it established a support level. That’s support level was tested a number of times and the market had relatively shallow bounces off of it. Also, the market was not able to challenge the resistance level that marked the beginning of the second leg. Leg 3 will began when the Leg 2 support level has been breached.

As I mentioned before, it is not wise to trade the first support breach. You should wait to make sure that the market closed below that support level before initiating the next round of strategies.

You might recall that this example is being taken from 1998. In the chart, you can see that the 105 support level was violated. The following week, the market tried to rally back through the 105 level, but it was slapped back down, closing near its low. From the beginning of the sell off, the selling pressure has been constant. These are the tactics I use when the market enters the third leg.
.
. 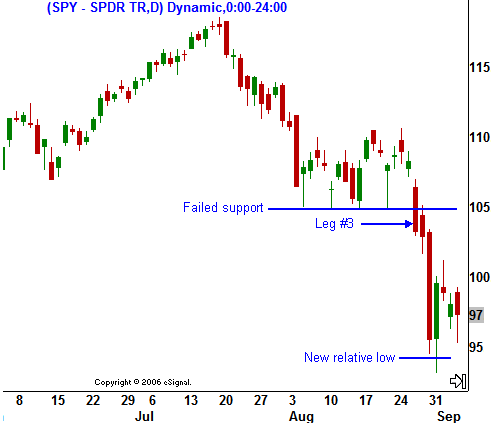 .
.
1. As the market continues to sell off you should watch the strength of the bounces. Ideally, the market will not have enough strength to rally back up to the resistance level. It will continue to make lower highs within the new range.

2. The market should continue to spend more and more time near the newly established support level. In this case, that level was 95.

3. My bias is bearish and I am looking to purchase puts where the implied volatility has not spiked up. I also look for stocks that were moving sideways prior to the market sell off. This tells me they were already “fully valued” and they were not able to participate in the run up.

5. I am also evaluating long positions at this point, and I am starting to line up stocks that I would like to purchase. The implied volatilities of the options have increased dramatically and I want to take advantage of that by selling naked puts. It is not time to execute that strategy yet. First, I need to make sure that the market has established and tested a support level and that it is ready to resume the long-term rally.

In the 1998 example, the sell off was fairly easy to spot. The market continued to make lower highs and lower lows. It also did not have large snap back rallies. Each rally was met by sellers very early. Conversely, during the February decline in 2007 the market was just getting primed to sell off when the bid to the market reappeared. Buyers aggressively came in and drove prices higher, until finally the market made a new multiyear high. Normally, sell offs of this magnitude will follow through for at least a month or two. This recent head fake demonstrates the importance of a game plan. The decline never materialized and this was merely a “bear trap”.

Market conditions can change very quickly and you need to identify key price levels. You also need to devise a plan of action at each price level. In my next blog, I will discuss how to identify Leg 4 a “V” bottom and I’ll cover the strategies you should use.

How I Trade Options – A Seasonal Example!

How I Use Technical Analysis to Find Stocks!

How I Trade Diagonal Spreads!