Rolling Naked Put Options For a Credit – A “Down and Out” Option Strategy!

This is a previously published article that is very relavant. We are in a bearish market and this strategy would have crushed you.

There is a strategy is known as “rolling for credits”. Let me describe the situation. When you sell a naked put, you are taking a stance. You really like a stock and you are willing to buy shares at a lower price. If the stock never drops and you never get the chance to buy it cheaper, you will be rewarded by the option premium you collected. Even stocks that represent a great “value” can fall much more than expected and every naked put writing strategy should include a well-defined support level. Before the option goes in-the-money, that support has to be breached. This resting point will give you a chance to reconsider the trade. This article is categorized in my blog under Trade Management and not under Option Strategies. That’s because no one goes into the position with the belief that they will have to roll “down and out”.

In general, naked puts carry the same risk as being long the stock once they are in-the-money. There are many “gurus” who will tell you to simply “repair” the strategy if the stock moves against you. They advise buying the front month short put and selling a farther out-of-the-money put with greater time until expiration. Since you are selling a put with more time, the premium will be greater and you can often do it for a credit. The new put is out-of-the-money so you don’t have to worry about assignment. When the new short put expires, you will have effectively avoided a loss and captured a profit. HOGWASH!

I speak from personal experience when I attack this “repair” strategy from many perspectives. I’ve tried it and I’ve had thousands of customers try it – unsuccessfully. Let me start with the biggest issue. The stock did the unexpected and broke a support level that warned you. At that point, you should close the trade, take your loss and admit that you were wrong. If you REALLY like the stock, watch it and wait for it to find support. I’m not talking about a “dead cat” bounce, I mean support that has been tested at least once and has formed over months. You’ll be surprised how far your “hot stock” can fall. Once this support has been established, consider writing a naked out-of-the-money put with the intent of purchasing the stock. If the stock breaks the new support level, take your loss and consider walking away from the pick. There is obviously something really wrong with the company. Fooled me once… fooled me twice…

One of the biggest pitfalls of trading is the inability to admit that you are wrong and the market is right. It’s the reason people don’t honor stops and the reason they seek “repair” strategies. We are not dealing with a house where we can rip apart a wall and find the leaking water pipe. That can be repaired. Traders are dealing with a stock and our information is never as good as everyone Else’s. When the price action tells us to get out, we have to respect it. Long before the Enron fraud was revealed, the chart was telling you – GET OUT. The insiders and institutions were bailing out way ahead of time and their sources were picking up on the warning signs. The other issue with a “repair” strategy is that you never intended to own the stock. If you sold a naked put because you just wanted to collect the premium, you are probably over-leveraged and you can’t afford to buy the stock. That in and of itself is a problem and you are forced to buy-in the short. For naked put writing you should always hold half of the strike price in reserve so that you can afford to buy the stock on margin (Reg-T). If you can’t afford to buy the stock you should consider a put credit spread.

In addition to the psychological issues, the strategy is impractical. When you buy-in the front month and sell a back month option, you will not be able to go one month out, you will have to go many months out. Let’s first dispel the notion of selling the same strike and rolling out to the next month. Once the option is in-the-money, it will have some intrinsic value and a time premium component. The amount of additional premium will be negligible. A small push lower will put it further in-the-money and once again, it will be in jeopardy of assignment. I was looking for a $50 stock (a common price level for most stocks) and I picked this stock randomly to give you an actual example. IGT has been in a very strong up trend and it has been a consistent performer both technically and fundamentally.
.
. 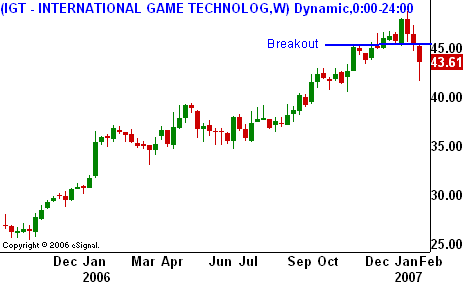 The rationale for this trade could have been to get long on the $45 breakout. Instead of buying calls you decide to sell the February 45 puts for $.80 with the idea that the breakout level represents support. If the stock continues higher, the put will expire and you will collect the premium. You also theorize that stock might test the breakout (support) before heading higher and you can take advantage of time premium decay. Today the stock broke the key $45 support level. The Feb 45 puts are trading at $1.75 and the March puts are trading for $2.10. You can roll the position to the March 45 puts but you are only picking up and extra $.35. After commissions – big deal. You are not providing much more protection and you are adding a month of risk exposure. Remember, the risk can come in the form of the stock, the group, the sector or the overall market. With the stock trading at $43.60, the March options are only trading $.50 over parity and with another push lower, they will be quickly be trading at intrinsic value. Given this scenario, the position will once again be subjected to the risk of assignment. Now let’s see how far out in time we need to go to sell the $40 strike. Remember, we are trying to generate a credit so we need to bring in more than $1.75. We have to go all the way out to Jan 2008 where the Jan 40 puts are bid for $1.90. WE ARE TAKING ON A YEAR OF ADDITIONAL RISK TO AVOID A LOSS AND MAKE A TOTAL OF $.95. We took in the original $.80 and we took in an additional $.15 on the roll.

You can find fault with my example and there are a million different scenarios. I’m sure I will hear from some traders that this example uses a low IV option and it works better with high IV scenarios. My response to that is that the “big” premium is there for a reason. Higher IV means greater uncertainty. You might not have to go out a year, but you will certainly have to span a couple earnings releases. Also, you are buying in a higher IV option to do the roll. Bottom-line, the net credit will not be commensurate with the additional duration of the trade. This stock has broken support and the risk/reward is poor.

The strategy reads well in a book but that’s a good as it gets. I’m not going to turn this into an article on how to properly sell naked put options, but here are a few of my rules. 1. Only sell naked puts on stocks you want to own. 2. Only sell puts below a well-defined support level. 3. Always make sure you have half of the strike in reserve so that you can afford buy the stock. 5. Know the company and make sure that news events are not looming. 5. If you get assigned, re-evaluate the company and decide to; sell the shares, hold the stock, or sell calls against the stock for added protection.

When you read articles on option trading, avoid “repair strategies”. From my perspective, a bad trade is a bad trade. You often need to establish your loss and get the bad taste out of your mouth before you can objectively look at the stock again. Once you’ve wiped the slate clean and put the trade behind you, you an consider a future position. At that time, it will be a “new” trade and it will need to stand on its own merit.

“I’m Reading A Course By Bernie Schaeffer. Is it a Waste of Time?”

What Determines An Option Bid/Ask Spread?