If you could borrow money at 5% and buy an asset that generates a 10% return, would you do it? The logical answer is yes, but there are two critical considerations. How stable is the 10% return and to what degree should you leverage? The stability of the returns can be difficult to predict unless you’re a 40-year old corporation with an established track record. Your “finger is on the pulse of the business” and taking on debt to buy back shares could be a brilliant move. If the earnings are consistent and your confidence level is extremely high, you might take on enough debt to buy-in all of your shares. This is called an LBO (leveraged buy-out) and corporations and private equity firms are exercising this financial maneuver. On the other extreme, some investors have taken out home equity loans to purchase stocks. Feeling confident, they have even purchased stocks on margin. They do not know the certainty of the returns, their debit interest is variable and unknowingly their employment may be in jeopardy. These examples cover the wide financing spectrum for corporations, hedge funds and investors This practice is the driving force behind the market and it will continue until debt and equity reach equilibrium.

The market’s direction comes down to interest rates and earnings. Global interest rates are on the rise and the cost of capital is going up. Chairman Bernanke voiced his concerns this week and stated that a scarcity of resources and high capacity utilization is putting upward pressure on prices. Wages are rising and productivity is falling. These forces are pushing up expenses and consequently they are pressuring corporate profit margins. The Fed Chairman also cited continued weakness in the housing industry. An economic slowdown would further impact revenues at a time when earnings growth rates are already expected to decline. During his speech he noted that the recent spike in oil has not been factored into his statements, but it needs to be considered. The market was expecting neutral statements and instead it got a dose of “tight light”.

Interest rates are still relatively low and assets are working hard enough to keep this financing strategy alive. However, if the assets start returning less and the cost of capital rises, the spread will narrow quickly. The speed with which it ends is determined by the amount of leverage that has been used.

On a short-term basis, I feel the headwinds are blowing and I do not see a catalyst for the market. At best, my bias is neutral. If the market breaks below SPY 141, I will be ready to take on a more bearish posture. After the FOMC related short covering rally two weeks ago, the market struggled to hold its gains. It has not even staged a half-hearted attempt at the February highs and it looks like that price level will represent significant resistance. Last week, you can see the gradual drift down to the SPY 141 level. If the market closes below it, a slow, steady decline could set in and that would be very bearish. There were a couple of nice intraday bounces off of the lows last week and the bulls are not throwing in the towel. Retirement accounts are being funded and the cash that is coming to market will lend support for the next two weeks. Lower oil prices and the safe return of the British sailors could create a nice bounce as well.

Retail sales, ISM and the Unemployment Report are on the economic calendar for this holiday-shortened week. These reports have not generated big moves recently and they are unlikely to do so this week. Earnings have tailed-off and we are getting ready for the next quarter. 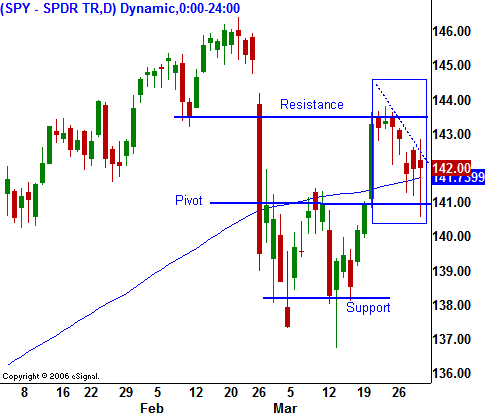 Trading at a Discount