The Market Is Weak – Why I Am Turning More Bearish

Posted 9:30 AM ET – The market is trading in a downward sloping channel and it has been below major moving averages for most of the year. This is a sign of steady selling pressure and the news over the weekend was generally negative. All eyes will be on the FOMC this week as the Fed prepares to hike rates.

Inflation has far exceeded the Fed’s forecast in terms of magnitude and duration. They are way behind the curve and supply disruptions will continue for many months. I believe that a 25 point basis rate hike will have a positive initial reaction (better than feared), but I believe that sellers will immediately return. This would be a sign that the Fed is worried about economic growth and this would put them further behind the curve. A 50 basis point rate hike would spark selling Wednesday, but I believe that the market will quickly rebound. This would signal that the Fed will progressively fight inflation and it would demonstrate that they believe economic growth is stable. The first rounds of Fed tightening are bearish. Regardless of the decision (25 or 50 basis points) this will weigh on the market through the summer and analysts will be keeping a close eye on activity. A 1% rate hike is expected in the first half of the year.

The CPI was released Thursday and as expected it was “hot”. Inflation hit 7.9% annual basis (.8% in February vs .7% expected) and that is the highest reading since 1982. The PPI will be posted Tuesday.

Fade any rally based on rumors that negotiations in the Ukraine are going well. Putin will not stop.

Goldman Sachs reduced earnings expectations for 2022 and that is the second time this year. They expect earnings to grow 5% and that is down from their most recent estimate of 8% growth. Slowing earnings growth will weigh on the market and we could see cautious guidance during Q1 earnings releases.

China is battling Omnicron. Major cities are on lockdown and these are the highest “reported” infection rates in two years. This will have a dramatic impact on economic growth and it will add to supply disruptions. China has been the global growth engine for decades and their activity is slowing. Their market is making fresh 52-week lows and as the “tide goes out” credit concerns will be apparent. To the degree that China supports Russia, foreign investment in China will decline at a time when they need it most. They are still trying to shore up property development credit issues and they are encouraging (forcing) other property management companies to buy distressed assets.

European banks have been a mess for more than a decade. The ECB did not force write downs a decade ago for fear that “too big to fail” banks could go under. Instead they allowed the banks to pledge “junk” as collateral. Fortunately, most of the major banks dramatically reduced exposure to Russia after they took Crimea. Slowing economic conditions due to the war and inflation will weigh on European banks and they have been pounded (DB, CS, UBS, ING, SAN).

Asset Managers are not going to aggressively buy ahead of the FOMC statement. We can expect choppy trading conditions with a downward bias until then.

Swing traders should wait for clarity. The downward sloping trading channel on the SPY is still intact and resistance at the 200-day MA will be stiff. That is the upper end of the trading channel and until we break through it we should assume that those bounces are shorting opportunities. I do not like what I see on the horizon for the next few months and I am fairly bearish. I won’t suggest shorting ahead of the FOMC, but I would short any nice bounce that stalls before we reach the 200-day MA.

Day traders don’t buy the early gap up. This is a relief bounce and the downside will be tested. The ideal scenario is a wimpy rally with mixed overlapping candles. When that stalls there will be a nice short (20%). Mixed candles on the open with a choppy move lower is most likely (40%). If a trading channel forms we will see a selling climax and I would not buy until you see it. Stacked consecutive red candles with little to no overlap on the open are possible (20%). This would be a sign of heavy selling and that would lead to a bearish trend day.

Things to consider: Quadruple witching is Friday. We have seen selling pressure the last year into monthly options expiration. The FOMC is Wednesday and this is a huge meeting. Tuesday and Wednesday are likely to be very dull so keep your size and trade count down. 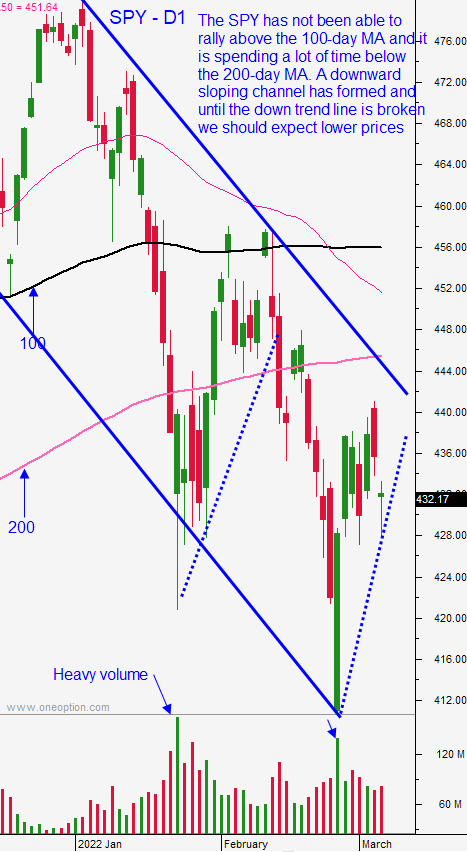