Posted 9:30 AM ET – Yesterday the market fought off a spike in interest rates for most of the day. The S&P 500 opened lower and it filled the overnight gap. As the day progressed, the selling pressure started to build. Once the downward momentum was established, sell programs kicked in. This type of momentum makes it easier for institutions to “roll” positions during quadruple witching and the move feeds on itself. The market has been able to tread water during the last week while interest rates have spiked and the FOMC’s reassurances this week will keep buyers engaged.

The selling pressure yesterday was nasty, but it was only one day. Market volatility has been rising and buyers and sellers are paired off. The S&P 500 is still within striking distance of the all-time high and I would like to see a close above SPY $394 today.

US 10-year Treasuries our up overnight and I believe that if bonds stop going down (they don’t have to go up) the market will make a new all-time high. To a large degree the market has ignored the spike in interest rates and you can see that by overlaying the SPY and TLT. Interest rates around the globe are rising and that is putting upward pressure on domestic yields.

When the selloff in bonds ends we will see a rotation back into tech stocks. Earnings season is only a few weeks away and the market bid will grow with each passing week. Another quarter of profits will help to bring down valuations. Savings rates have been extremely high in the last few months so there is money on the sidelines. I also believe some of the $1.9 trillion stimulus will find its way into the market.

There wasn’t much overnight news, but FedEx reported a 21% increase in revenues. It is considered an economic bellwether. The Fed raised its economic growth forecast to 6.5% in 2021 and we are at the beginning stages of a recovery. States are reopening and the number of new Coronavirus cases is declining rapidly.

Swing traders should hold the SPY position. Expect some market volatility during the next few weeks. Watch for three or more consecutive days where the TLT does NOT decline and start selling some out of the money bullish put spreads on tech stocks that have relative strength. Make sure that you are selling your bullish put spreads below technical support. We have not seen a floor in TLT so don’t jump the gun. The best options trading strategy right now is to sell bullish put spreads and to take advantage of accelerated time premium decay. This strategy will also allow you to distance yourself from the action.

Support is at the low from Thursday and resistance is at the high Thursday.
.
. 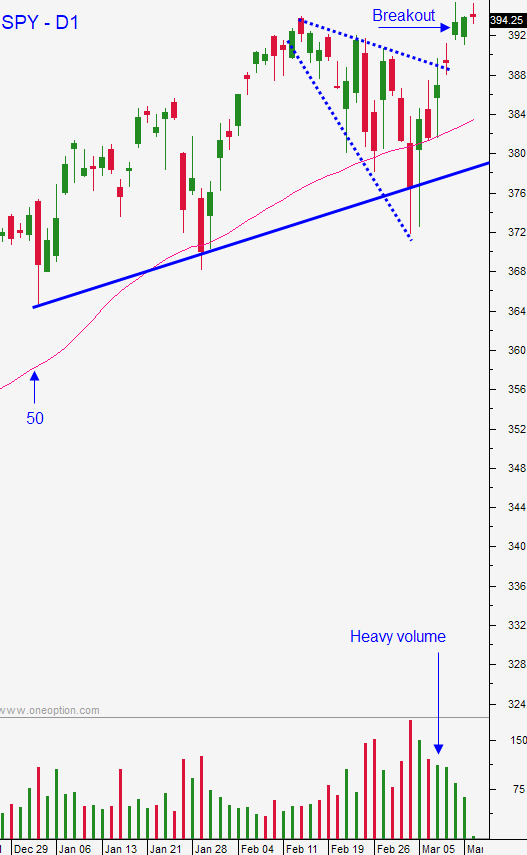