Posted 9:30 AM ET – After bumping its head against ceiling for two weeks, the market probed for support. A nasty drop Tuesday almost tested the 50-day moving average before buyers emerged. The snapback rally lasted the entire day and the S&P 500 finished in positive territory. The upward sloping channel is still intact and there are sellers at the top of the range and buyers at the bottom of the range.

Perhaps the most telling event yesterday was the immediate plunge in option implied volatilities. The VXX barely got off the deck during the recent decline and it was crushed at the first sign of market support. This tells me that institutions believe that volatility will remain low in the near future.

Jerome Powell reiterated the Fed’s commitment to keeping interest rates low during his Congressional testimony yesterday. Economic conditions are improving and without the threat of tightening the market is in a “sweet spot”.

The House will vote on the $1.9 trillion stimulus bill on Friday. If passed, some of this money will find its way into the market.

Bonds have been selling off and interest rates have been rising. Yields are still near historic lows and they have far to go before they impede economic growth.

Swing traders should look for opportunities to exit call positions on the next move higher. Given the market backdrop that I’ve outlined, selling out of the money bullish put spreads is the best strategy. The drop that we saw yesterday has presented some opportunities in the tech sector and I believe this is an excellent entry point. The market bid is still strong and we should see a gradual move higher the rest of the week.

Day traders should wait for the bid to be tested today. After a swift round of selling yesterday I believe that the downside will be tested this morning. Overseas markets were generally weak even after our rally so the selling pressure could be sustained. Once support has been confirmed, buy stocks with relative strength. Travel and entertainment stocks (hotels, casinos, airlines, theme parks and cruise ships) have been very strong. Banks and retail are also seeing upward momentum. Heavy Buying, Relative Strength 30, and Bull Run are your go to searches. Pay particular attention to stocks that have heavy volume and relative strength. Those two characteristics will greatly increase your odds of success.

Two weeks ago I felt that the slingshot off of the February low would blow through the upper end of the trading channel on the heels of a stimulus bill and that we would see a buying climax. That window has passed and I now believe that we will stay within this trading channel for another month or two. The stimulus bill will certainly keep a bid to the market, but traders will be watching interest rates and inflation very closely. 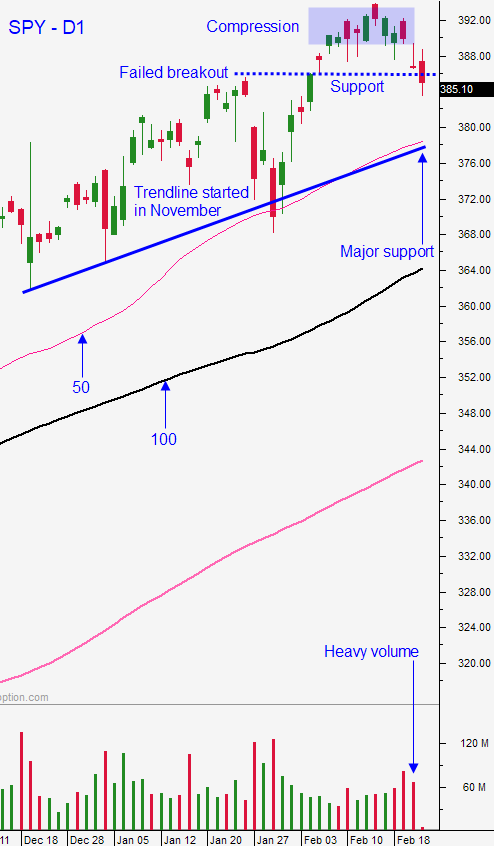