Posted 9:30 AM ET – The market is still digesting recent gains near the all-time high and it doesn’t have the firepower to push through. Profit-taking has kept a lid on every rally in the last week. Treasury yields are on the rise and that has some traders spooked. Concerns that inflation might be an issue were confirmed this morning when the PPI came in “hot”. I still believe that the market will challenge SPY $400 this month.

Democrats will pass a stimulus bill before the end of the month and we can expect a big one ($1.9T). That money will find its way into the stock market.

Commodity prices (oil and agriculture) are on the rise and inflation is surfacing. This morning the PPI increased 1.3% and an increase of .4% was expected. Retail sales jumped 5.3% (1.1% expected) and consumption is starting to rise now that new Coronavirus cases are declining. The economic numbers have been very solid this year.

Higher inflation is initially bearish for the market because it means that the Fed will tighten. That is not currently the case. Jerome Powell has stated that they will let inflation rise above their target and they have no plans to tighten in the next 18 months. A chart of the 10-year bond shows a downward sloping trading channel on the daily chart. We have broken through the lower end of that trading channel and that typically signals a selling climax. I will be watching for a capitulation low on TLT during the next week.

Swing traders should have a combination of long call positions and bullish put spreads. We have been buying calls that expire in March and we will start scaling out of those positions in the next week so that we can avoid time premium decay. We are long deep in the money options so that influence has been relatively minor. We also have a number of bullish put spreads that will expire in the next 2 to 3 weeks. The market dip that we saw at the beginning of the month instantly reversed and that is a sign that buyers are in control. If the stimulus bill is passed and the market shoots higher we will take profits.

Day traders should watch the early action. The S&P 500 dropped 10 points after the PPI news and we need to make sure that support holds. Down opens are the best set up right now. We can gauge the selling pressure and relative strength is much easier to spot. Once support has been established we have an opportunity to enter at excellent levels. Gaps up often spark profit taking and once that selling pressure gains momentum it is difficult for the market to recover. We want this drop to run its course in the first hour and then we want to see a firm low of the day with a higher low and a move into the opening gap. If the market makes a new low of the day after two hours of trading, favor the short side. 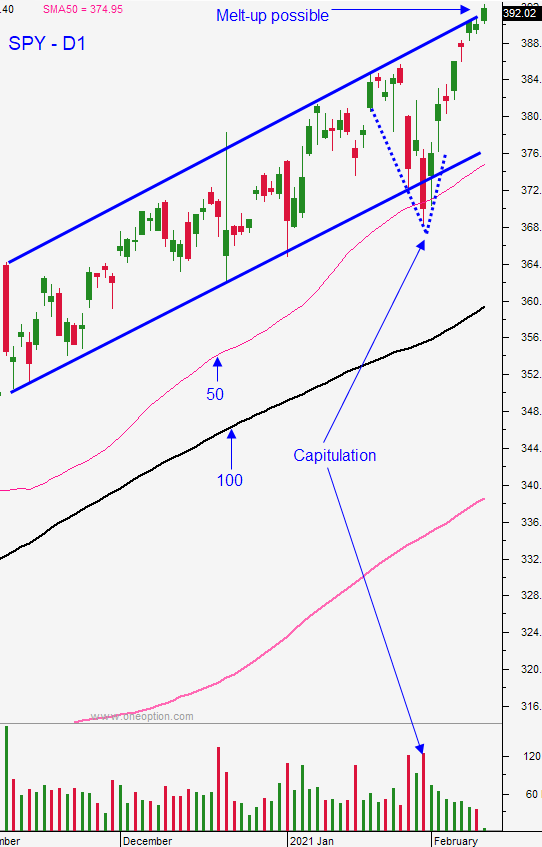